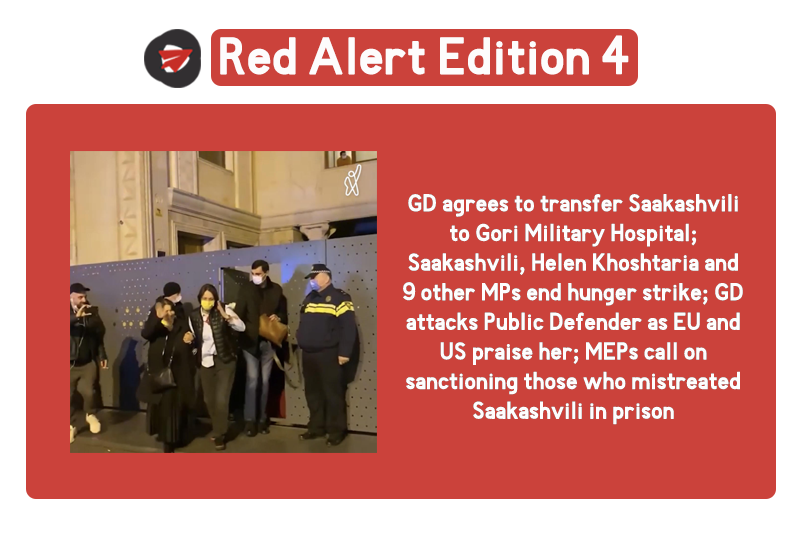 After a weeks-long saga Mikheil Saakashvili, on the 50th day of the hunger strike, was finally transferred to the Gori Military hospital. The offer was made by the Minister of Justice on Friday, after the dramatic few days, during which Misha lost consciousness, was assessed as being in critical condition and diagnosed with Wernicke encephalopathy.

"I agreed to go to the Gori hospital that was built by me, via the highway that I also built" - wrote Mikheil Saakashvili in a letter from the Gldani prison.

"Recently we have faced an epidemic of hunger strikes in the country, which was really unacceptable ... the health condition of many MPs significantly deteriorated. - said the Minister of Health, Ekaterine Tikaradze. Her Government, however, was unrepentant until Friday afternoon, when it became increasingly obvious that leaving Saakashvili in Gldani could have ended fatally either for him, or for MP Helen Khoshtaria, also on hunger strike for 17 days, or both. Public discontent towards the stubbornness of GD also grew in the wider public and social media, particularly because of the footage of Misha's abuse during his transfer to Gldani prison.

A group of doctors assembled by the Public Defender, Nino Lomjaria, concluded on November 17 that Mr. Saakashvili’s health condition was “critical” and recommended that he immediately be transferred to the intensive care unit in a functional and well-experienced multi-profile hospital. “These conditions are not satisfied in the Gldani prison hospital”, the physicians noted. Lomjaria immediately came under attack from the GD Chairman Irakli Kobakhidze, who said that the conclusion of the doctors was "fake" and that Lomjaria would "bear the consequences". This attack on Ombudsman was preceded by a public letter of support from two influential MEPs in charge of Georgia's file in the European Parliament - Marina Kaljurand and Sven Mikser.

On Friday the US State Department and US Ambassador to Georgia also called on the Georgian government to heed the ombudsman's recommendations regarding the treatment of Mikheil Saakashvili and to treat him "with dignity and justice." "When a person's life is in danger, there is no need for any kind of discussion or debate," said Kelly Degnan, the US Ambassador to Georgia.

Mounting international pressure, continuous demonstrations and rallies in the last week as well as understanding that the fatal result was quickly approaching seemed key in Georgian Dream's (GD) grudging agreement to finally transfer to the "damn civilian hospital" as former US Ambassador to Georgia Ian Kelly tweeted on Thursday.

The current crisis, however, is far from over, even though the hunger games ended without a fatality. The political crisis in Georgia is deeper, as the legitimacy of the GD government is in question by a substantial part of the population. Saakashvili still remains in prison and the opposition, while united on Misha's mistreatment, will now pursue their own tactical routes.