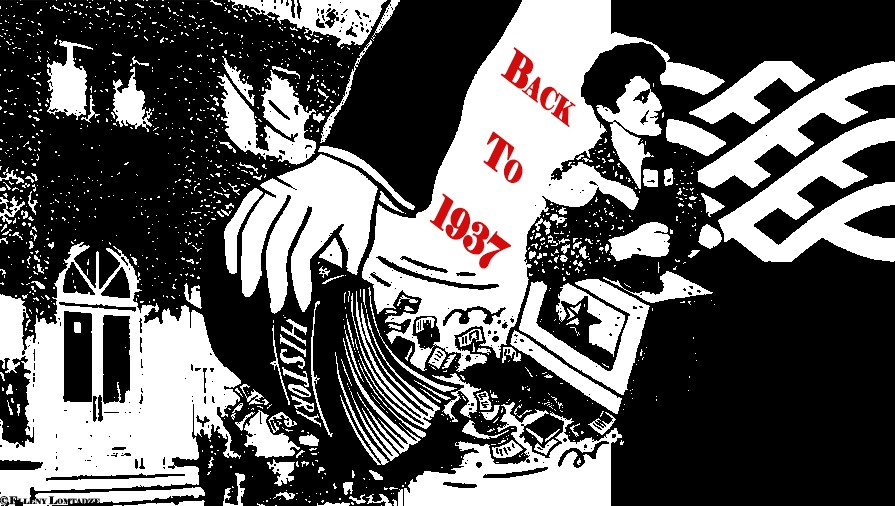 Longest-serving minister of the Georgian Dream (GD) Government Tea Tsulukiani changed the portfolio last year - from Justice to Culture and Sports; however, she maintained her ruthless political style. Since her appointment at the traditionally calm and non-political Ministry of Culture, Sports and Youth, a number of scientists and managers were fired on political grounds, decision-making has become centralized, and publicly active figures with critical political positions have been demonized and ostracized.

One of the first decisions of a newly appointed Tsulukiani in June 2021 was to delegate a loyal jury member to the literature contest “Litera,” with an apparent aim to influence the jury's decision on the best literary pieces. As a result, writers and other jury members boycotted the censorship, and the contest was not held for the first time since 2005.

Then Ms. Tsulukiani decided to rid the Georgian arts and culture of politically disloyal persons. Long-serving employees of the art museums were fired in January 2022, including the art critic, art designer, senior curator, and dozens of museum personnel. Political motives were reported in the firings by the dismissed persons. After the museums, Minister Tsulukiani moved to the theaters. Prominent Georgian director of Marjanishvili Theater Levan Tsuladze was not given a renewed contract in January 2022 - reportedly because Mr. Tsuladze, like thousands of Georgians, signed the petition demanding the release of Mikheil Saakashvili from prison. Head of the Kutaisi Opera Theater, Tornike Marjanishvili, also had to resign - allegedly, the Minister asked him to quit because of his active participation in the 2020 Parliamentary elections.

In parallel, Minister Tsulukiani launched an assault against the National Museum of Georgia, headed by David Lordkipanidze since 2005 (being appointed by President Saakashvili seems to be a cardinal sin for Ms. Tsulukiani). The National Museum, one of the most successful and scientifically accomplished entities in Georgia, received 20 scientific grants from the National Rustaveli Foundation - a grant-giving body financed from the state budget. These grants, usually a subject of pride for higher education institutions, involved certain politically active persons; therefore, the board of the Museum, headed by Tsulukiani’s loyal, requested the withdrawal of the grants from the Ministry of Culture. The Ministry also made changes to the bylaws of the museum, effectively making the grant applications impossible without a green light from the Minister’s lieutenants. Furthermore, the National Museum was accused of not keeping track of the national treasures and allowing Georgian embassies and state institutions to use the paintings and other artifacts without reporting.

Tsulukiani attacked the Giorgi Leonidze Museum of Georgian Literature in early 2022, supposedly because the Director of the museum is a well-known public figure - Lasha Bakradze, who is vocally critical of the GD. In late 2021 the Literature Museum published a collection of poems by a relatively unknown Georgian poet Elene Bakradze (Darian), and mistakenly included two poems by another famous Georgian poet. Director of the museum instantly apologized and stopped the distribution of the book; however, the Ministry of Culture did not consider this sufficient. An official statement issued by the Ministry, reminiscent of the chilling Soviet-time wordings, said that “justly indignant citizens” reported the mistakes and that this issue will be “seriously discussed” with the director, who “is now sick with Covid.” Ministry then ordered the Museum to withdraw all copies, including those gifted away - obviously an impossible task to implement.

Georgian NGOs slammed the Ministry of Culture for politicized decisions. The Center for Social Justice, GYLA, and ISFED expressed support to the victims of "personnel cleansing" and volunteered to counter their discriminatory dismissals in the courts. On January 17, a petition was published, in which over one thousand citizens demanded to dismiss Tea Tsulukiani and to “liberate the Georgian cultural system from the principles of Soviet-style governance.”

Tsulukiani is famous for “cleansing” the state institutions she runs from the “remnants” of the United National Movement (UNM). During her tenure at the Ministry of Justice from 2012 to 2020, she fired dozens of “politically disloyal” employees. Many of them sued Tsulukiani and won in Georgian courts. However, winning a case in a Georgian court does not mean reinstatement to the lost job because of legal technicalities, though many fired received salary compensations. Tamaz Akhobadze, a lecturer at the Ilia State University, who is currently part of the Droa political party, won three court cases after being fired from the Center for Crime Prevention in 2014 for a Facebook post. According to unverified estimates, several million GEL were reimbursed in compensations from the state budget to the politically dismissed persons from the Ministry of Justice system under Tsulukiani’s tenure. Same might happen again, this time in the field of culture and sports.