Putin’s Invasion Playbook All Too Familiar to Georgia 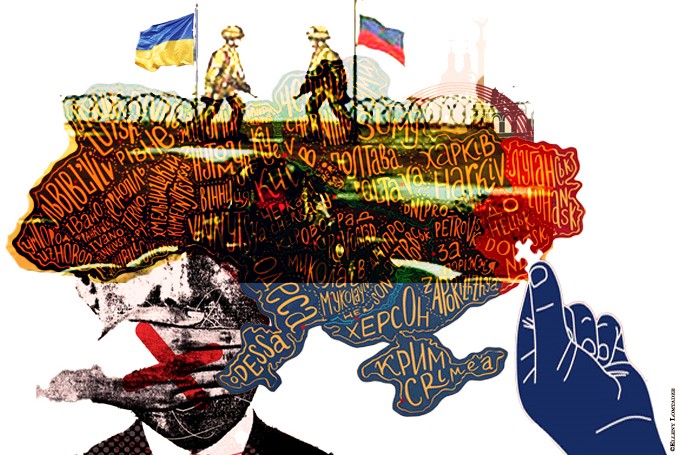 The Russian president’s recognition of breakaway regions as sovereign states followed by an all-out attack is straight out of its Georgia Playbook.

Let us list the similarities: in 2008, Russia handed out passports prior to its invasion, exercised effective control over the so-called separatists, who were, in reality, a mere extension of the Russian government, conducted large-scale military exercises near Georgia with troops remaining in the field after their completion, claimed an entirely false “genocide”, sent troops into a sovereign European neighbor then announced their “recognition.”

In Georgia too, the invasion was preceded by a mass evacuation of South Ossetia’s entire civilian population to Russia. In Georgia too, Russia attacked from the sea, air, land, and cyberspace.

There is one minor difference, however: in Georgia, the recognition of the occupied territories more or less marked the end of active hostilities. In Ukraine, it was just the beginning. This is proof, were it needed, that recognition has nothing to do with self-determination and international law, and that a Kremlin invasion can have any pretext whatsoever.

The first takeaway from the Georgia Playbook is that Putin wants regime change in Ukraine, just like he attempted to change Georgia’s government in 2008.

Make no mistake — the occupation, recognition, or the annexing of Eastern Ukraine is not an end goal, no matter how much pride Putin takes in land grabs and historical parallels with Peter the Great and Stalin, who territorially expanded Russian and Soviet empires. Putin’s goal of “denazification” of Ukraine is a euphemism for wanting to install a puppet administration.

In Georgia too, the end goal was regime change. As Condoleezza Rice recalled in her memoirs, Russia’s Foreign Minister Sergey Lavrov called her during the August 2008 war and attempted to raise the issue of removing President Mikheil Saakashvili from power, but was immediately rebuffed. Putin’s rhetoric towards President Volodymyr Zelenskyy, or Petro Poroshenko before him, is reminiscent of his Saakashvili rhetoric. Putin seeks puppet regimes in neighboring states, like Belarus, or Central Asia.

If Putin fails to decapitate Ukraine through its blitzkrieg and the Zelenskyy government survives and pushes back, he will continue to use the land held by Russian forces as pressure points. The mere fact of occupation creates pressure on democratically elected leaders. In Ukraine, just like in Georgia after 2008, there will be political leaders who will blame Zelenskyy for losing territory, and for losing the war. Georgian Dream led by oligarch Bidzina Ivanishvili won the 2012 elections in part by blaming Saakashvili for the outcome of the 2008 war.

Ukrainian politics is full of pro-Russian politicians and the plot to change the regime through coups, elections, or instability, including military action, is once again straight from the Georgia Playbook.

The second major takeaway from the Georgia Playbook is that if Putin gets away, he will do it again somewhere else.

Georgia 2008 was followed by Crimea 2014, Donbas 2015, and now the whole-of-Ukraine 2022 with the intervention in Syria occurring in the meantime. Any region of the former Soviet Union of Putin’s choosing—such as Transdniestria, the occupied area of Moldova—could be the next target. Moldova is an obvious next stop. With a Russian military base, an unresolved conflict, and the country’s pro-Western government, all the trigger points for the next Russian intervention are present. Much more inflammably, Estonia’s Narva region or Lithuania’s borders with Kaliningrad and Belarus could also attract Putin’s wandering eye. Many Central Asian states will also be considering their futures today, despite the Russian leader’s assurances that it is only Ukraine he regards as an illegitimate entity.

Russia will change the situation on the ground, achieve its military goals, will negotiate to gain time, and then invade somewhere else. It has done so in Abkhazia, South Ossetia, Crimea, and now in Donbas. The Western approach so far has been reactive. It allows Russia to act and then expects Russia to reverse its decisions because of sanctions, which so far have proven to be weak and ineffective. As long as this modus operandi remains, Russia will be a step ahead – changing the reality on the ground, imposing the fait accompli upon the West, and then negotiating “new normal” relations within the “new realities” on the ground, only to prepare for another round of aggression.

The final takeaway from the Georgia Playbook is that after Russia occupies a region, it shuts them off completely from the rest of the world, Russifies them, and prepares for annexation. International missions will be suspended, monitoring instruments will be blocked, negotiation formats will be killed and international organizations will be straight-jacketed through the Russian veto. This has happened in Abkhazia and South Ossetia and is likely to happen in every region of Ukraine that Russia will now occupy. The Minsk agreements are dead and so are other formats for negotiation. Putin will do his best to keep them dead.

If the West has learned anything from the Kremlin’s Georgia Playbook and Russia’s actions in the last 15 years, it needs to act now. Devastating economic sanctions on Russia, military support for Ukraine, including with equipment and armed forces, full and total isolation of Russia from the civilized world, clear European prospects for Ukrainian and Georgian membership of the EU and NATO, and other crippling financial, economic, and diplomatic steps must be introduced immediately. Only by dramatically increasing the Kremlin’s costs will there be any chance of returning to peace on the European continent.