The new level of polarization in Georgian politics 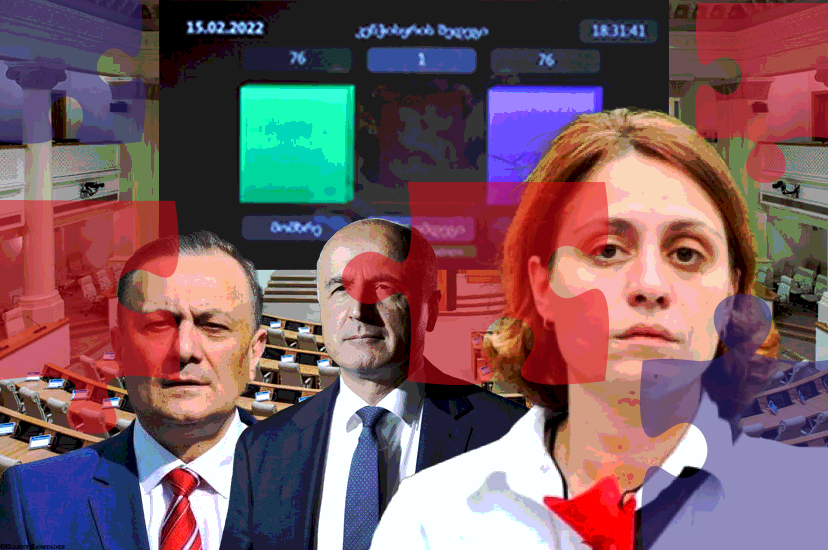 Georgia is slowly reaching new heights of polarization. This week Georgian Dream (GD) stripped three opposition MPs of their parliamentary mandates and launched a vigorous black PR attack against the founder of the critical media Channel Formula TV. Meanwhile, GD lost local council majorities in four regions after UNM and Gakharia’s For Georgia opted for the marriage of convenience.

The GD majority in the Parliament stripped three opposition MPs - Lelo’s Badri Japaridze, Labor’s Shalva Natelashvili, and Droa’s Helen Khoshtaria of their mandates on February 15. Thus the number of MPs in the Parliament of 150 went down from 149 to 146. Neither of these vacant seats will be filled since the opposition parties closed their party lists in 2020 as a part of the Parliamentary boycott after the flawed 2020 elections.

As a result, Lelo will lose the parliamentary faction, and the Labor and Lelo will lose state funding. Moreover, the opposition MPs will not be able to form investigative commissions since 50 MPs are needed for the commission, and the opposition will be just shy of 50 votes after Japaridze’s departure. UNM wants to inquire into Saakashvili’s mistreatment, and Lelo wants to study elite corruption cases; however, this seems unlikely now.

In the cases of Natelashvili and Khoshtaria, the GD reasoned that they were skipping the plenary sessions and committees. Both MPs were indeed boycotting the Parliament, however, on February 10, Natelashvili announced that he would stop a 14-month long boycott. In the case of Badri Japaridze, the reasoning derived from the court decision of January 12, which convicted him and Mamuka Khazaradze, another co-founder of Lelo, of fraud. However, the prison sentence was not applied due to the statute of limitations.

Legal analysis by FactCheck.ge showed that the Parliamentary majority had political discretion, whether to vote the MPs out or not. Missing the sessions and guilty verdict, especially when the sanction was not applied due to the statute of limitations, could have easily been discarded by the parliamentary majority. However, as the GD chair Irakli Kobakhidze explained the following day in an interview - Japaridze “went against the system and then did not repent” thus, “the political decision was taken” to strip him of the mandate.

Transparency International Georgia called this decision a step “towards weakening” the Parliament. EU Ambassador to Georgia Carl Hartzell issued a statement, saying that “a political choice was made,” “which arguably came at the expense of political inclusiveness and democratic pluralism in Parliament.” GD Chair Kobakhidze immediately snapped back at Hartzell’s assessment as “unfair and not objective, and therefore not interesting.”

Badri Japaridze and Lelo, however, do not intend to give up. On the same day, when his mandate was stripped, Lelo nominated him as a majoritarian candidate in the Rustavi majoritarian elections scheduled for April 2. Former majoritarian MP from GD won Rustavi mayoral elections in 2021, thus a new majoritarian will have to be elected in April. UNM and other opposition parties promptly backed Japaridze, thus setting up an interesting heads-up battle between the united opposition and GD candidates in Rustavi.

Founder of Formula TV, David Kezerashvili came under another smear campaign from GD leaders and propaganda channels Imedi TV and PosTV. This time an obviously coordinated campaign alleged that Kezerashvili was behind the call centers, which employed thousands of English-speaking Georgian youth in attempts to sell non-existent stocks and cryptocurrencies to random well-off retired citizens of EU countries.

Georgian authorities indeed arrested several persons and charged them for being part of the transnational crime. In October 2021, Georgian and German authorities uncovered a scheme and arrested seven persons for selling non-existent securities, stocks, commodity assets, currencies, and cryptocurrencies to individuals all over Europe and misappropriating their funds by misusing their trust. The law enforcers took down another ring of 5 persons on February 18. Neither then nor now have the official authorities and law enforcers made any link between the call centers and Kezerashvili, whose only business in Georgia is an opposition-minded Formula TV.

The smear campaign came after the background of the opposition UNM’s politician Levan Khabeishvili attacking the Government and State Security Special Service on being behind the ubiquitous call-centers in Georgia. Khabeishvili started a campaign several months ago, exposing links of the call centers with the Georgian Dream and alleging that stolen millions were used to fund Georgian Dream’s electoral campaigns. Khabeishvili and his allies visited several call centers in Tbilisi and called on the authorities to shut them down on opposition-minded TV channels. The Government, which did not follow up on the exposures, seems to have retaliated now by targeting the opposition and Formula TV founder. Leader of the Georgian Dream Irakli Kobakhidze openly named Kezerashvili as a mastermind of the elaborate scheme in an interview with the Government propaganda channel Imedi TV. Prime minister Irakli Gharibashvili also said that "the members of the previous government own the call-centers in Georgia today” and threatened to “put an end to the speculations of the opposition."

Smear campaigns against Kezerashvili are not new. He is regularly accused of financing various opposition parties and is despised by the Georgian Dream leadership for sustaining a critical media outlet - Formula TV. In September 2021, the Georgian Supreme court overturned previous courts’ decisions and charged him with squandering over 5 million Euros from the Ministry of Defense’s budget. Kezerashvili won the court cases in 2017; however, after Gharibashvili became a PM in 2021 and former prosecutor-general Tadumadze became the Supreme Court’s chair in 2019, a number of political cases resumed. In Summer 2021, Prime minister Gharibashvili threatened in the Parliament that after his departure from PM’s post in 2014, Kezerashvili won the court cases and that from now on “his case will be taken care of”. Georgian Dream seems to be doing just that.

Gakharia and UNM take over the local council in 4 municipalities

Meanwhile, UNM and Gakharia's "for Georgia" party found a working modus operandi in the regions of Georgia. Gakharia lucratively oversold his hand in four districts, where GD did not have majorities in the local councils - Rustavi, Zugdidi, Tsalenjikha, and Chkhorotsku. In all four, Gakharia's local council members were elected as local council chairs, despite "for Georgia" having only a few seats and UNM having nearly a majority.

In return, UNM grabbed all local council commissions and deputy chairmen of the local councils. Opposition Lelo party also entered the power-sharing arrangement. Effectively, this "deal" between UNM and For Georgia strips the GD of important budgetary resources and decision-making commissions in the four regions.

The next important destination is Batumi, where the local council is deadlocked, due to the stroke and subsequent death of the UNM local council member, allegedly due to the pressure from GD to switch sides. In the run-off elections, scheduled for early April 2022, UNM fielded the son of the deceased councilor. One more regional center - Senaki, is also poised for a deal between UNM and Gakharia in the nearest weeks.

GD used the UNM-Gakharia deal to reinforce the long-standing talking point that Gakharia’s resignation was “treason” and that Gakharia is Saakashvili’s stooge. As GD Chair Kobakhidze declared, GD’s goal for 2024 elections will be to “fully destroy'' UNM and that soon more details will become known about Gakharia’s “treason.”